What Are Spiked Dog Collar Used For?

What is the purpose of a spiked dog ?

The general purpose of spiked dog collars is to protect a dog’s most vulnerable area, the neck if a predator or another dog attacks them.

Origination and History of Spiked Dog

What we refer to today as spiked dog collars were initially known as wolf collars. They are also known as a locale in Italian and carlancas in Spanish. Shepherds and farmers worldwide made or purchased these collars to protect their dogs if a wolf or other predator attacked them while they were guarding herds of sheep or livestock. This practice dates back to ancient Greece, medieval times and is even still used in modern-day Turkey.

It has been said that shepherds and farmers awarded their best guard dogs with spiked collars for successfully defending the livestock they guarded by killing the offending predator. While that may have been the case on some farms, it makes more sense for a dog to be given a protective proactively to ensure they can continue working.

Why a spiked dog for protection?

Generally speaking, predators will attack prey by inflicting wounds to a dog’s most vulnerable areas; the throat, the neck, the face, and the head. By outfitting a dog with a thick, spiked collar, one of their most vulnerable areas is protected. Another benefit of this form of protection is that one of a predator’s first moves would likely attack the neck and throat. The spikes would cause damage as soon as the attack began. The sooner a predator becomes injured, the faster the predator will reach the point of being unable to continue attacking the dog.

Uses of a Spiked Dog

Today, most dogs enjoy luxurious lives, making spiked dog collars more of a fashion statement than a necessity to protect their lives. However, these collars do continue to serve a similar purpose today. As our encounters with wildlife begin to increase, dog owners have real concerns about the safety of their four-legged family members. As a result, companies have formed for the sole purpose of designing body armor for dogs in addition to spiked collars. Purchasing a spiked dog for your dog provides them with a basic form of body armor should they be attacked. The thick leather can protect their neck, and the spikes can injure the animal trying to bite them.

Other dog owners purchase spiked collars to make their dogs appear more intimidating. This intimidation tactic is frequently utilized by individuals who use their dog as a guard dog for personal protection or property protection. Sometimes an intimidating appearance is enough to make a potential assailant or thief think twice before attacking someone or stealing property; the presence of a fierce dog has the potential to preserve both a dog handler’s safety and the safety of the dog.

In the spiked dog collars. Hunters would outfit their dogs with spiked collars and then locate wildlife and initiate conflict with the wildlife they encountered. The hunter’s goal was for their dog to fight with the wildlife, inflicting injury with their spiked collars, which made killing their prey more achievable. This barbaric and inhumane practice resulted in the unnecessary death of many dogs.

Style and Fashion of Spiked Collars

Modern-day spiked dog collars are usually incorporated into high-quality, thick leather collars and tend to have a more stocky and wide type of spikes than the long thin spikes first used in wolf collars. Occasionally, jewels or studs are included to be fashionable. The wolf invented by our ancestors was much cruder. The spikes were designed to stick as far out as three inches from a dog’s neck instead of the shorter spikes most frequently incorporated into modern-day spiked collars. Some of these wolf collars were made only of metal; others were made of leather and metal or wood and metal.

Spiked collars are not the same as prong collars. Prong collars are to train a dog by negative reinforcement. If a dog does not listen, the handler applies tension on the dog’s leash to cause the prongs to tighten on their neck. Be sure to thoroughly research prong collars before deciding to use one on your dog. If you choose to use a prong collar for dog training, always be sure that it is secured to prevent your dog from breaking out of it.

If you choose to purchase a spiked dog collar for your bully to wear, here are a few considerations to keep in mind:

You should always remove the spiked collar before allowing your dog to play with other dogs or children to prevent injuries.

You should never leave your dog unsupervised or crated wearing the spiked collar to ensure their safety. A dog may injure himself by scratching against the spikes. Further, most spiked dog collars are made of thick leather and have a metal buckle closure to be durable. Durability does not provide any breakaway safety features; this means that if your dog gets the stuck on something, such as a , fence, or tree, they could strangle themselves attempting to escape. Thankfully, there are many ways to prevent dog collar accidents.

Bully breed owners are responsible for combatting the negative stereotypes associated with the breed; a spiked collar may cause your bully to be discriminated against, thereby presenting opportunities to change breed stereotypes. 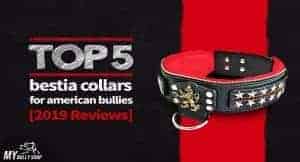 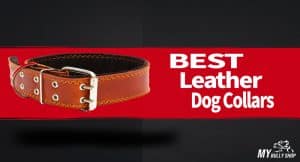 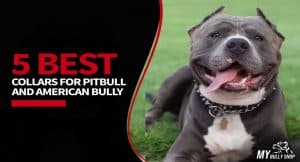